Recap / Steven Universe S5E13 "Your Mother and Mine" 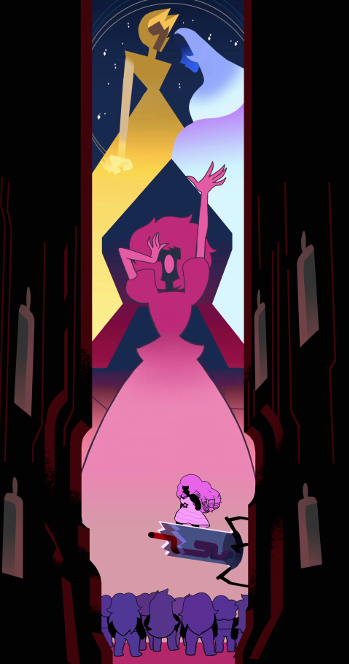 "Rose's message began to resonate, to Pink Diamond's dismay. Her colony was falling apart. So, like a coward, she called for her Diamond allies, Yellow and Blue, to help."
Advertisement:

… Lars and the Off Colors are fleeing from Emerald, who swears to rain destruction on them. She's been pursuing them since they stole her favorite ship, the Sun Incinerator. Lars taunts her because he has correctly surmised she loves the ship too much to destroy it… But not so much that she won't try to disable it and reclaim it.

Out pops Steven from Lars’ head. He presents Lars with a sub sandwich, then asks if he can bring someone else through.

Lars: Bigger than you?
Steven: Maybe a few pickles bigger.

Lars grudgingly allows it. Steven dives back into Lars’ hair, then back out with a violet-red twin: Garnet, shapeshifted into a copy of Steven. Once clear of Lars’ head, Garnet resumes her preferred form and immediately rushes around the deck of the ship gushing at the Off Colors. While she is absolutely sincere in her compliments, the Off Colors are off-put by them, as their experience leads them to believe she's making cruel jokes at their expense. Garnet is brought up short when Padparadscha brings it up.

Garnet steps up to tell them Rose was real, and launches into a telling of how Rose came to love Earth and humanity. Rose asked Pink Diamond to spare the Earth, only for Pink Diamond to laugh in her face. Rose finally had enough and rebelled, asking other gems if they would join her. The Crystal Gems were born, including a Pearl who belonged to no one and a Bismuth who preferred to forge weapons rather than build edifices for high-status Gems.

Garnet goes on to describe the war, how long it went on, and the toll it took. She describes Pink having called for help, and that Yellow, Blue and White Diamond arrived. Rose was pushed into a Decapitation Strike on Pink to end the war, but this didn't work as intended, as the Diamonds, enraged at the loss of one of their own, reacted with the Corruption Song. Rose was only able to save Pearl and Garnet, who were right next to her at the time, by grabbing them and covering them with her shield.

The story does not have the desired effect. The Off Colors are dismayed because in their versions Rose was the villain, so her defeat was a good thing. In Garnet’s, Rose was a hero, so her Pyrrhic Victory over Homeworld was a Downer Ending. Garnet tells them that Rose fought for the right of gems to live as themselves, in whatever form. She goes on to point out that they, the Off Colors, are proof that the Diamonds can't stop them from popping up. This gives the OC something to think about, and Steven as well.

Garnet: We! Are! Everywhere!

Steven muses after storytime to Garnet that perhaps Pink is still alive somehow, because Stevonnie dreamed her memories when they were stranded on the jungle moon. Garnet remains certain that Pink was shattered. But they table the discussion in order to help Lars raid an outpost for fuel.