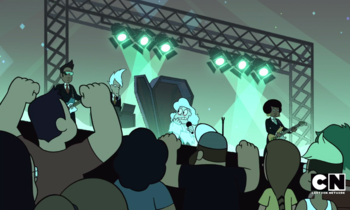 "I think I might be... a gh-gh-gh-ghost!"
As Sadie practices with her band, Steven acts as videographer, using his dad’s VHS-era camcorder.

Steven explains he wants early footage to look old, while the band discusses songs and the effects Sadie wants to have with her voice. There's a brief interruption by Sadie’s mom, which embarrasses her, given Barb’s over enthusiastic stage mom behavior in the past. Barb mugs for the camera briefly, then recognizes her daughter’s discomfort and backs off, leaving them to rehearse.

The scene cuts to Greg Universe listening to the band. Steven explains about Sadie’s alter ego, and how if he likes what he’s hearing, he should see them live.

The scene cuts again to Sadie’s basement, where the band is working on their "I Am" Song to introduce themselves:

Greg compliments Sadie on her alter ego and her voice. The band is in store bought Halloween costumes to evoke their spooky vibe, even as Greg tells them they're doing great as beginners, but they need someone to handle gigs and merchandise. Steven pipes up that Greg knows all that stuff, and Buck backs him up as having taught Buck everything he knows. The kids are all in agreement. That's that: Greg accepts the job as their manager!

Greg calls his old friend Sunshine Justice and plays a snippet of “Working Dead” for her, before deciding to email her a link to the song. She replies quickly and Greg reads the reply to Steven.

Greg: [reading] “This is absolutely the worst recording I've ever heard. It's a shame because I love the song! Let's get them on stage with some decent equipment!” THEY'VE GOT A GIG!
Steven: Yeah! Yeah! Yeah!

Next up: planning for the gig. Greg’s still got a significant bankroll so he tells the kids to go big so they can have a proper presence on the stage and make a splash in their first appearance. Greg springs for Fog machines. Lasers. T-shirts. The kids are amazed.

As they begin packing up to roll out, Jenny shows off their new T-shirt. Barb delivers more equipment. Greg explains its for the band given they have a gig in…

Sadie: [interrupting] Some no name city! Not a big deal!

But in her hurry to hide the truth from Barb, Sadie knocks over the banner announcing the band live at Empire City. Barb immediately begins getting worked up and trying to think of all they'll need, but Sadie cuts her off and reminds her that the band is hers to do on her own. Barb backs off again and Sadie groans in dismay, explaining how suffocating her mother can be, and she's just waiting for a chance to interfere. Dismay turns to confusion as Greg laughs and explains his parents wanted nothing to do with his music, and wanted to hear nothing about it because they thought he was throwing his life away. Sadie ponders this new perspective.

There's a brief shot of the band kids excitedly sitting in the van, then they're backstage at Sunshine Justice’s venue. As Sadie gets made up, she peeks out at the crowd, seeing a blonde woman with punky hair and big shades. She becomes upset thinking her mother showed up in a wacky disguise expecting Sadie not to notice. Steven awkwardly suggests Barb should've gotten makeup tips from Sadie.

Sadie Killer and the Suspects take the stage, with Buck, Jenny and Sour Cream dressed in black dress suits, and Sadie dressed in white. A creepy organ opening is followed by a Ska riff and Sadie sings the band’s newest number, “G-G-G-Ghost”. She offers a wink to the punky lady in the audience as she performs, and the crowd eats it up!

Backstage, the band celebrates and the punky lady comes backstage. Sadie starts to greet her but Greg beats her to it. It turns out that wasn't Barb Miller, but Sunshine Justice herself. She teases Greg about his “star child” gimmick, but tells the kids that the crowd loved Sadie Killer and the Suspects. Sunshine tells them they're welcome to play her venue any time.

Sour Cream, Jenny, and even Buck Dewey are asleep in the back. Steven’s still filming on his old camcorder. Sadie realizes and muses aloud that she kind of did want her mother there. She asks Greg to set them up a gig in Beach City. Greg promises to make it happen. Steven closes out the tape.