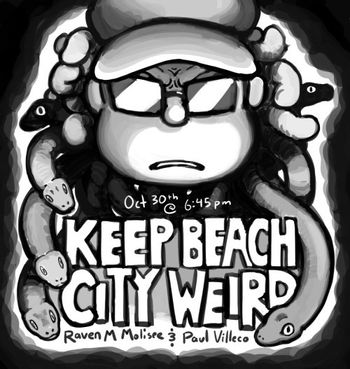 One morning, Steven cries for Pearl to save him, only for her to find out that Steven was playing Steven Tag with Garnet and Amethyst. In the form of Steven with cool sunglasses, Garnet wins this round by throwing Amethyst, also shape-shifted into the form of Steven, up in the air and knocking her down on the sand.
Advertisement:

Steven finds Ronaldo making paranormal theories about the holes from the cave parasites. Afterwards, Steven joins him on his quest. Later they find rocks from the red eye, which Ronaldo states grew from the ground. Then they found flowers from Rose's moss. Ronaldo reveals that Peedee is not into paranormal events, so Ronaldo puts his trust in Steven. Later, at the top of the lighthouse, Steven finds out that Ronaldo's theories were about snake people, or "Sneeple", taking over the world, leading Steven to gain a fear of snakes.

Steven goes back home to tell the gems, Amethyst and Pearl, about the snake people by showing them the "evidence" Ronaldo showed him. Pearl and Amethyst point out that all of that stuff was caused by them and the monsters they fight. When Steven tells Ronaldo the truth, Ronaldo declines it and tells Steven not to listen to minor facts and start making your own truths. Steven says that's sounds like the opposite of truth. When Ronaldo lifts the print from the crater on the beach, it's shaped like Steven. Steven begins to explain Steven Tag, but Ronadlo stop him and then sadly walks away. Steven finds Ronaldo's blog is about to be removed. Pearl tells Steven not to feel bad over disappointing him, as people create conspiracy theories because they want to feel important. Steven tells the other Crystal Gems he has an idea to "fix" Ronaldo, and he'll be back in a hour.

Steven tries to cheer up Ronaldo by pretending to be a snake person to scare him and Peedee, but Ronaldo knocks Steven out with a potato. Steven wakes up in the lighthouse tied up by Ronaldo with Peedee watching from afar. The gems come to rescue Steven. Ronaldo revealed his golden armor and tries to attack the gems, but they beat him easily. Steven frees himself from the rope and stops the fight revealing that the "snake person" Ronaldo captured was him in a costume. Steven tells the gems that he was trying to inspire Ronaldo, which doesn't seem to have worked, but then Peedee gives him new theories about everything that he missed, facts about the Crystal Gems. He laughs, overcome with joy. Peedee, Steven, and the Crystal Gems leave the lighthouse together while Ronaldo happily shouts that the truth will be revealed.

We Iris Out over Ronaldo ranting triumphantly.