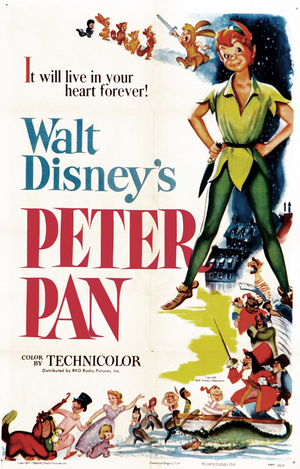 "The second star to the right shines with a light so rare,
And if it's Never Land you need, its light will lead you there."
Advertisement:

Disney Animated Canon entry #14, and the last one to be distributed by RKO Pictures. It is based on the 1904 stage play (and, by proxy, its 1911 book adaptation) by James Barrie, and is also the last film that all nine of Disney's Nine Old Men worked on together.

The well-remembered 1953 Disney animated movie presents a cozier version of Peter Pan, keeping most of the incidents, but virtually none of the original dialogue. Furthermore, it is one of the earliest examples of when the play's usual casting tradition was waived and a male actor was cast for the title role.

During their Direct to Video sequel period, Disney made Return to Never Land, in 2002, one of the few animated sequels to get a theatrical release (but still not part of the Disney Animated Canon itself). Their publishing arm has released a series of prequel novels written by Dave Barry and Ridley Pearson. Finally, their take on Tinker Bell has long been something of a mascot character for the company, and, in the new millennium, the Spin-Off Disney Fairies line of books, merchandise, and a made-for-DVD film was launched focusing on her and other (original) pixies (similar in concept to the Disney Princess line). And, for the boys (though it features a token girl) is a pirate-adventure flavored take on the Dora the Explorer and Go Diego Go formula called Jake and the Never Land Pirates, where a group of kid pirates match wits with Captain Hook and Smee. A live action remake, Peter Pan and Wendy, starring Alexander Molony, Jude Law, and Yara Shahidi is set to release at an unspecified date in 2022.

Captain Hook kills a pirate just because he found his singing to be annoying.

Captain Hook kills a pirate just because he found his singing to be annoying.