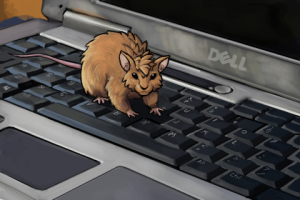 Unshaved Mouse after watching too many cartoons.
"Have You been to Bahia, my friend?"
— The Tumblr page's Subtitle
Advertisement:

Who is Neil Sharpson? Oh, no one important. Just your average Happily Married Irish cartoon enthusiast-slash-comic book geek-slash-playwright... transformed into a mouse by the immortal spirit of Walt Disney as punishment for not liking Beauty and the Beast, and tasked to review every single film in the Disney Animated Canon. Along for the ride: several very opinionated maps of various continents, Nit the Nit-Picking Nit, Walt Disney himself (who flip-flops between Trickster Mentor and plain ol' Jerkass at the drop of a hat), and a gaggle of vile villains led by the Horned King.

Perhaps it would be prudent now to mention that this blog's very first entry on TV Tropes was under Continuity Lockout, heh?

By Sharpson's own admission, The Unshaved Mouse began in 2012 as a project to determine which Disney movie would be the best to introduce his daughter to. But over the years, it ballooned into one of the hardiest review blogs on the Internet, featuring a surprisingly expansive supporting cast and a fairly elaborate Meta Plot. But between the hundred and one in-jokes, Sharpson's love for the Disney canon - indeed, (almost) all animation - is practically tangible, and his reviews are as informative as they are entertaining. At the end of each review comes a 20/20/20/20/20 scale where he objectively (in his opinion) scores the quality of each film, based on Animation, Hero, Villain, Supporting Cast, and Music. And while he makes his personal view on each movie very clear, the scale is objective enough to give some pretty high rankings to films that he personally dislikes.

In late 2014, having caught up with the Canon's then-latest offering (Frozen) he promptly turned his attention to Disney's other box-office powerhouse: the Marvel Cinematic Universe.note With select non-MCU Marvel movies as well; having reviewed all of Fox's X-Men films. These are scored on a slightly different 25/25/25/25 scale, covering Hero, Villain, Supporting Cast, and Adaptationnote A sort of catch-all category used to measure how close he feels the film got to the spirit of the comics.

The end? Don't you believe it. As of this writing, more than half the reviews on Sharpson's site consist of non-Disney fare. Being a gentlemouse of diverse tastes (and a fondness for fundraisers), Sharpson takes reader requests on a semi-regular basis, usually in exchange for donations to some humanitarian cause.note Readers were originally limited to just animated movies... then he made allowances for comic-book movies... then TV shows... and finally, pretty much everything under the sun (except Star Wars, which he feels has already been reviewed to death). The resulting reviews have gone as high as Princess Mononoke and as low as The Toxic Avenger - with the odd side-project such as:

Advertisement:
open/close all folders
Shortstember (2016)
Kicked off in August, partly as Shameless Self-Promotion for the much-coveted Littlewoods Ireland Blog Award. Covers a single "iconic" short for each decade from the 1910s to the 2010s.
Mouse Goes To War!
Kicked off in summer of 2017, covering various World War II cartoons from both the United States and the Axis Powers.
Bats Versus Bolts
Kicked off at the start of 2019, combing the best-known Dracula and Frankenstein adaptations of each generation and pitting them against each other.
Shortstember (2021)
Kicked off in September, covering viewer-requested episodes of some of Disney's best-remembered animated TV shows of the early '90s.

Peruse his many adventures at yonder link

The blog's reviews and metaplot exhibit the following tropes: