Western Animation / The Adventures of André & Wally B. 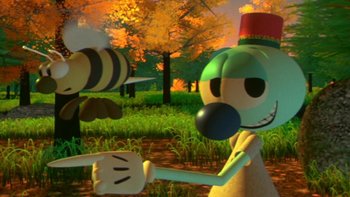 I only hope that we never lose sight of one thing – that it all started with a... a bee?
Advertisement:

The Adventures of André & Wally B. (or just André & Wally B.) is a 1984 short CGI film produced by the Lucasfilm Graphics Group (which would eventually form into Pixar after George Lucas sold the division to Steve Jobs), directed and written by Alvy Ray Smith, and animated by John Lasseter.

The plot is wafer thin. One morning in a forest, a little man named André is waking up. Soon, Wally appears and starts taunting him. André points the other way and, with Wally temporarily distracted, runs off. Wally quickly catches on and chases André, and eventually stings him. Wally flies off victorious, but André throws his hat at him offscreen.

Being such an early CGI film, there were many challenges in getting it made. It was rendered using a 13,000,000$ Cray X-MP/48 supercomputer provided by Cray Research and ten VAX-11/750 superminicomputers from Project Athena, the fastest and most advanced computers in the world at the time—which wasn't saying a lot. The modeling program used at the time could only produce simple geometric primitive shapes (cones, cubes, spheres, cylinders, patches, lines, etc.) in spite of John Lasseter wanting a flexible pear shape for André's body, and Wally B.'s feet, as is found in most cartoon characters—Ed Catmull eventually managed to create a teardrop shape that was achieved by using two spheres cut in half and made in different sizes and the computer filled in the section in the middle, and Ed put in the controls to make it distort and bend in different ways. And on top of that, there was no way to output the animation directly onto film, so Craig Good had to photograph an actual computer monitor calibrated with the film playing it frame by frame to get it onto a print. And due to the big deadline, the crew forgot to get the cartoon finished in time for its premiere at SIGGRAPH in 1984, showing it with parts still in wireframe form—regardless, it was met with superb reception there, and the film was ultimately completed anyway for the Toronto International Animation Festival.

The film is notable for being the first attempt in CGI to use Squash & Stretch animation techniques and create non-geometric shapes that could do that in CG, and also for its then-complex 3D backgrounds with a particle system for the leaves, and the cartoon was lit like a Maxfield Parrish painting. It included on the 1993 CGI short film anthology Imaginaria, and, owing to the staff behind it, it is also nominally considered to be the first of the Pixar Shorts.