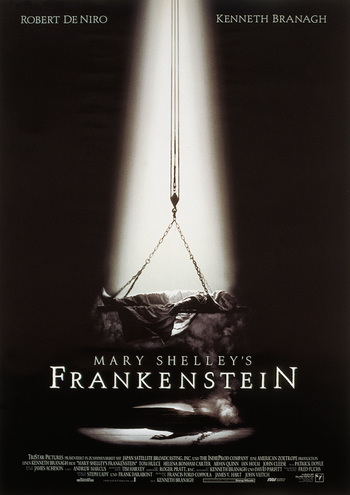 It's Alive.
I busied myself to think of a story.....which would speak to the mysterious fears of our nature...and awaken thrilling horror. One to make the reader dread to look around. To curdle the blood and quicken the beatings of the heart.
— Opening line taken from the introduction of the source material

The 1994 film version of Mary Shelley's Frankenstein is directed by Kenneth Branagh, who stars along with Robert De Niro. In contrast to Bram Stoker's Dracula, this is actually much closer to the original novel, although many new elements were still added to the story.

At the turn of the 19th century, a ship searching for a route to the North Pole encounters a man wandering the ice. Nearing death, the man says his name is Victor Frankenstein, and he relates a story to the captain explaining how his attempts to play God and reverse Death caused the destruction of his entire world.

This film contains examples of the following Tropes:

This film averts the following tropes common to most Frankenstein movies: