Western Animation / Spider-Man: Into the Spider-Verse 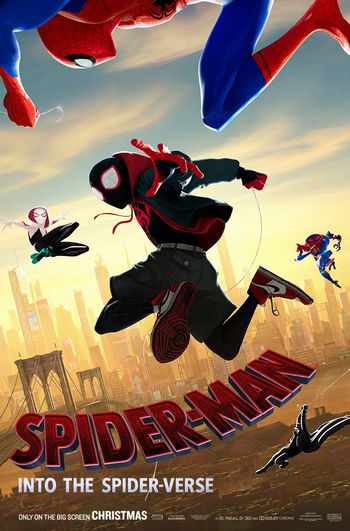 Miles Morales: When do I know I'm Spider-Man?
Peter Parker: You won't. That's all it is, Miles, a leap of faith.note From center-clockwise: Miles Morales, Peter B. Parker, Peni Parker, Noir Universe Peter Parker, Gwen Stacy. Not pictured: Peter Porker.
"We all have powers of one kind or another. But in our own way, we are all Spider-Man."
— Mary Jane Parker
Advertisement:

Alright, let's do this one last time.

Spider-Man: Into the Spider-Verse is an Academy Award-winning 2018 computer-animated superhero film directed by Peter Ramsey (Rise of the Guardians), Bob Persichetti (The Little Prince) and Rodney Rothman and produced by Phil Lord & Chris Miller (The LEGO Movie), with the screenplay written by Lord and Rothman. A co-production between Sony Pictures Animation and Marvel Entertainment, the film is the seventh consecutive entry in the Spider-Man film series, and the first animated entry in the franchise. The movie itself is a loose adaptation of the Spider-Men and Spider-Verse storylines, with elements from the former's sequel integrated into the story.

The movie introduces the audience to Miles Morales and the concept of the Spider-Verse. Recently bitten by a radioactive spider, Miles witnesses the murder of his universe's Spider-Man and takes on the responsibility of stopping Kingpin's Super-Collider before it can jeopardize the city and perhaps the Multiverse as a whole.

The Super-Collider inadvertently brings other Spider-People into Miles' universe. They include: Peter B. Parker, a middle-aged Spider-Man going through hard times; Gwen Stacy, a teenager who was bitten by a spider instead of her best friend Peter; Spider-Man Noir, a hard-boiled detective version of Peter Parker from the 1930s; Peni Parker, a cheerful girl from the far future who fights inside SP//dr, a mecha-spider; and Peter Porker, an anthropomorphic cartoon pig.

Together, the Spider-Gang aims to take down Kingpin, destroy the Super-Collider, and get back home. Along the way, Miles just may be able to prove his worth to carry on the mantle of being his universe's Spider-Man.

This is the first theatrically-released Spider-Man movie to be animated. A cartoon short "Spider-Ham: Caught in a Ham" was released with the DVD and Blu-ray version of the movie detailing Spider-Ham's adventures prior to being caught up in the Super-Collider. The Blu-Ray version has an "Alternate Universe Cut" feature that integrates several incomplete deleted scenes into the film to showcase What Could Have Been.

Spider-Man: Into the Spider-Verse provides examples of:

open/close all folders
Tropes A to C
Tropes D to L
Tropes M to Z
"Anyone can wear the mask. You can wear the mask! If you didn't know that before, I hope you do now. 'Cause I'm Spider-Man... but I'm not the only one. Not by a long shot."
Feedback