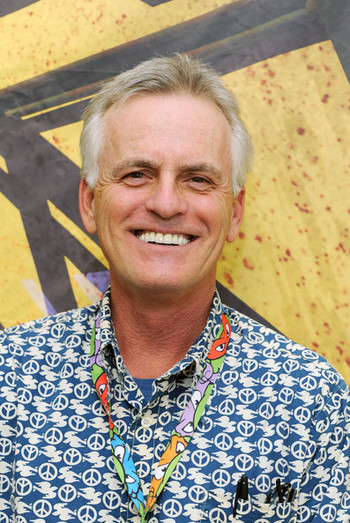 "Laughter is the best medicine. And the cool thing is, you can't OD and the refills are free!"
Advertisement:

Robert Frederick Paulsen III (born March 11, 1956) is an American voice actor, comedian, impressionist, and singer. Rob loved cartoons as a kid and aspired to be a professional hockey player. Ironically, acting was something to "fall back on" and even though Rob voiced numerous characters in Warner Bros. cartoons (Taz-Mania, Tiny Toon Adventures), he is best known as the voices of the wisecracking Raphael in the original animated Teenage Mutant Ninja Turtles series (and would later portray Donatello in the 2012 version before becoming voice director of the succeeding Rise of the Teenage Mutant Ninja Turtles series, and in more recent times the Motor Mouthed, Groucho Marx-esque Yakko Warner on the Peabody and two-time Emmy award-winning series Animaniacs and the boisterous and energetic laboratory mouse Pinky on Animaniacs as well as Pinky and the Brain.

"I'm getting paid to do what I got in trouble for in the seventh grade," jests Rob Paulsen, who won a Daytime Emmy in 1999 as "Outstanding Performer in an Animated Program" for Pinky and the Brain (WB). Though nominated twice previously, the victory was especially sweet due to the most formidable competition ever - fellow nominees Louie Anderson, Ernest Borgnine, Dom De Luise, and Jeffrey Tambor. In addition to his Emmy, Rob won back-to-back Annie Awards in 1997 and 1998. "I absolutely love what I do and thank my lucky stars for 25 years of full-time employment in this business," he admits.

"It's a treat to portray a complex character," Rob explains about Pinky, a gangling mouse with funny teeth, a head filled with clouds, and an inane imagination that is punctuated with a staccato laugh. "Besides ... where else could I find a job where emotional outbursts and odd exclamations like 'Egad!', 'Narf!', 'Poit!', 'Splonk!' and 'Zort!' are allowed?" With over 2,000 half-hours of animation to his credit, Rob's versatility shines in his starring role as the voice of Yakko in Animaniacs. One of Yakko's most popular musical skits, "The Nations of the World

" (set to a Mexican hat dance tune), was memorized by Paulsen, and is a guaranteed showstopper if asked to sing it at a convention.

The goal of bringing absolute believability to a fictional character, live-action or animated, is what every actor strives for. Those committed to their career who combine experience, passion, and skill are likely to succeed. Those gifted with exceptional talent who focus on maximizing their potential by finding their own niche, quickly break apart from the pack. After years of honing their craft and consistently delivering memorable performances in which the character impacts an indelible image on the viewer, the public and the industry take notice, singling out the best.

Paulsen's extensive credits include on-camera roles in numerous motion pictures including Body Double, Stewardess School, Eyes of Fire, The Perfect Match, Spaceballs, and Warlock. His television acting credits include guest-starring roles on MacGyver and St. Elsewhere. Additionally, he is one of the most sought-after voice actors in the commercial arena, performing in over 1000 of them.

Realizing how fortunate he is and passionate about giving to charity, Rob supports various charitable organizations, particularly those benefiting children and cancer research. Rob's volunteer work with GOALmodels is particularly rewarding. GOALmodels, a high school program in Reseda, California, is designed to inspire ninth-graders to set goals and overcome obstacles in life. Blending his life experiences with passion for his work, his presentations are informative, entertaining, and inspiring. In his leisure time, Rob enjoys golf, ice hockey, and riding his motorcycle. He spends the majority of his free time with his wife, Parrish; son, Ash (an editor for UDON Entertainment who used to work for GameXplain, but left to co-create Good Vibes Gaming), and two Yorkshire terriers, Pooshie and Tala.

He started a podcast, "Talkin' Toons with Rob Paulsen", and is planning a live Q&A/Meet & Greet tour. Both can be accessed at RobPaulsenLive.com

Best buds with Pinky and the Brain co-star Maurice LaMarche.

Some of Paulsen's roles include:

Example of:
Voices in One Room