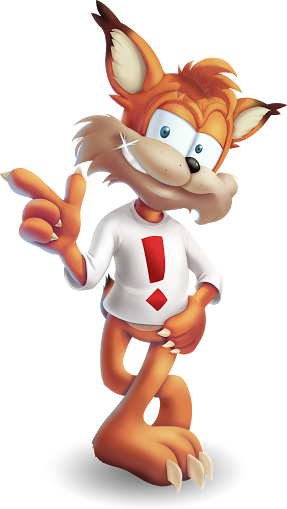 What could paws-sibly go wrong?
Advertisement:

Welcome to The '90s. After the success of a certain blue hedgehog, a bevy of other game developers immediately took notice, and soon every publisher seemed to have their own Mascot with Attitude starring in their own Platform Game. And Accolade was no different. Enter Bubsy the Bobcat, a pun-slinging feline with the ability to glide by holding out his arms like an airplane and who constantly finds himself combating an alien race with a serious love for stealing yarn.

The series began in 1993* (despite the 1992 copyright, it didn't hit stores until May 1993) with Bubsy in: Claws Encounters of the Furred Kind, originally released for the SNES and Sega Genesis, and later rereleased for PC. This was quickly followed by Bubsy II (for SNES, Genesis, even the Game Boy) and Bubsy in: Fractured Furry Tales (for Atari Jaguar) the following year. While the 2D games received mixed reviews from critics, they sold well. Accolade even attempted branching the franchise out into an animated series. But these days, most gamers probably know Bubsy best not for these earlier outings, but for the entry that made it the poster child for the Polygon Ceiling trope: 1996's Bubsy is 3D in Furbitten Planet for the PlayStation.

Releasing just two months after Super Mario 64 showcased how to handle the Video Game 3D Leap and Crash Bandicoot demonstrated how to tackle 3D platforming on the PlayStation, Bubsy 3D was a commercial failure and is now seen as one of the worst games of the fifth generation. Accolade would abandon the studio that developed it (don't worry, they bounced back) and permanently shelve the property, ending the tail of Bubsy after three short years.

Except not really. A 2015 Steam Greenlight campaign resulted in a brief resurgence by way of a compilation of the first two entries, entitled Bubsy Two-Fur. The franchise then came back in earnest via Bubsy: The Woolies Strike Back

, a 2½D sidescroller entry in the series developed by Black Forest Games that released on October 31st, 2017 for PlayStation 4 and PC.note Ironically, not only once again within months of new Mario and Crash Bandicoot games, but a new Sonic the Hedgehog title as well. The launch trailer

acknowledges this. On May 16th, 2019, a running platformer from BIT.TRIP developer Choice Provisions entitled Bubsy: Paws on Fire

released for PS4, PC, and the Nintendo Switch. Playing similar to the company's BIT.TRIP titles, this entry features many playable characters besides Bubsy himself, including a Woolie in a flying saucer, as well as Virgil the Vole and Arnold the Armadillo from the failed TV pilot.

In the game Bubsy 3D, an infamously bad game that killed the series, these 3d animations (specifically death animations) were most the only redeeming factor aside from things like some of the music for example. And here are Bubsy's death animations that seem to show comedic effort (compared to the Bubsy pilot).

In the game Bubsy 3D, an infamously bad game that killed the series, these 3d animations (specifically death animations) were most the only redeeming factor aside from things like some of the music for example. And here are Bubsy's death animations that seem to show comedic effort (compared to the Bubsy pilot).