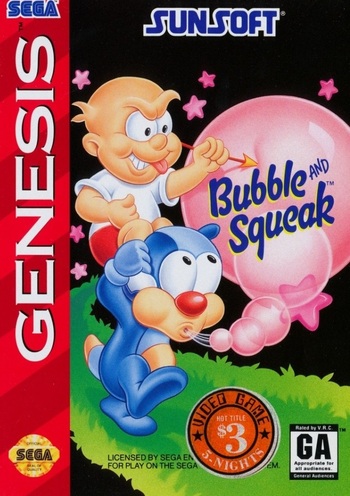 Bubble and Squeak is a Platform Game by Audiogenic Software.

On the planet Grool lives Squeak, one of the planet's Cat Folk species. One day, a villain named Kat of Nine Tails comes to Grool and kidnaps the populace. Squeak manages to escape from this predicament, and runs into a human boy named Bubble.

The two decide to team up and, using their powers, traverse a series of levels in which they must collect gems and coins and battle enemies to rescue Squeak's people.

Bubble and Squeak contains examples of: