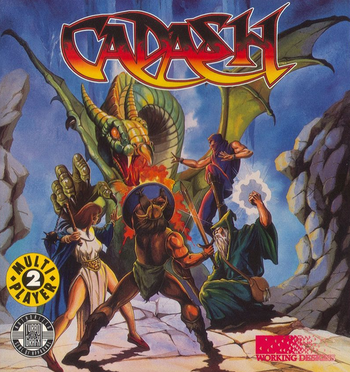 Cadash is an Arcade Game made by Taito Corp. in 1989. It is an extremely rare example of RPG videogame specifically made for the arcade market, and by that we mean that plays almost like Zelda II: The Adventure of Link, with a platforming structure interspersed with all the elements of a typical console RPG.
Advertisement:

The plot is generic and bare-bones, but we're speaking of an era when people simply mashed buttons, so it can be justified: the evil Baarogue kidnaps Sarasa, princess of the kingdom of Deerzar, and four heroes (a fighter, a mage, a priestess and a ninja) are asked by the King to save her, defeat Baarogue and rescue the kingdom.

Since this is an early example of videogame RPG, furthermore simplified to appeal to the arcade crowd, there are many typical RPG tropes, as the list below shows.

Tropes that can be found in the game: