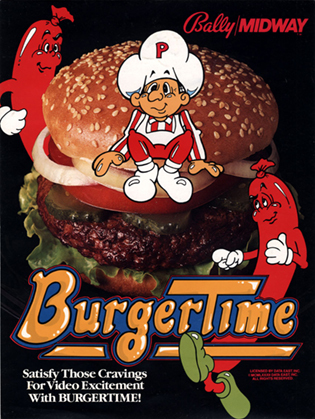 BurgerTime is a platform maze game by Data East, originally released for arcades in 1982.
Advertisement:

You play as Peter Pepper, burger chef, and construct burgers out of giant buns, hamburger patties, lettuce, tomato and cheese slices. Walking over a burger part drops it to a lower level, until the parts finally pile up on a plate.

Peter is chased by food enemies; besides using his legs, he can fire his pepper shaker at them to briefly stop them in their tracks (pepper supply is limited, but you can replenish it by grabbing prizes like ice cream cones and ketchup bottles). If an enemy is atop an ingredient when it falls, it will fall farther; enemies can also be squashed between falling burger parts.

Mattel produced most of the early home ports; their Intellivision port did so well, it became a pack-in for the Intellivision II. An Intellivision-exclusive sequel, Diner, was developed at Realtime Associates (using levels from the unfinished game Masters of the Universe II), and released in 1987. In this game, Peter Pepper has to kick balls of food so that they roll off platforms and down ramps to land on a plate, while avoiding or crushing the enemies.

Data East released two obscure follow-ups for arcades. Peter Pepper's Ice Cream Factory, released in 1984, took away Peter's pepper shaker but let him crush enemies with scoops of ice cream before throwing them onto cones; it was rarely seen until it appeared with the original game on the Compilation Rerelease Data East Arcade Classics. Super BurgerTime, released in 1990, remixed the formula by introducing a much younger protagonist, even bigger levels, burgers of different sizes, new enemies that could now be combined with the burgers, and Boss Battles.

In 2008, Namco released BurgerTime Delight for mobile phones. Monkey Paw Games remade the game in 2011 as BurgerTime World Tour, but it was removed from digital storefronts in April of 2014 when their license agreement expired.

In 2019, BurgerTime Party! was developed by XSEED Games for the Nintendo Switch.