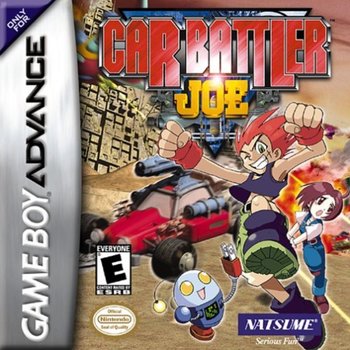 Car Battler Joe is an obscure Game Boy Advance Action RPG developed by Ancient (also responsible for Beyond Oasis) and published in the U.S. by Natsume. It was also released on the Wii U Virtual Console in 2015.

The plot is fairly standard—you, Joe, must find your missing father by traveling the wastelands and dropping off cargo between towns, entering tournaments along the way.

What makes the game unique is the action-oriented battle system and the sheer amount of customization available—there are over 3 million part combinations. All cars have weapons attached, used with the GBA's shoulder buttons, and you can employ both those and traps to wreck your opponents' cars.