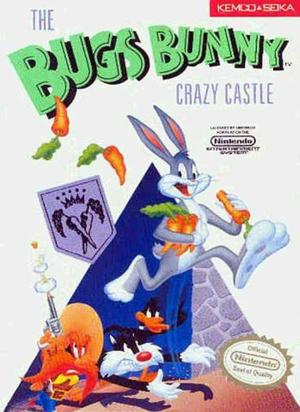 Come on, Doc! Stick it in the Nintendo!
The Bugs Bunny Crazy Castle is a series of games released for the NES, Game Boy and Game Boy Color, developed by Kemco and starring, well, Bugs Bunny.
Advertisement:

Games in this series:

The plot of each game revolves around Bugs Bunny venturing to Crazy Castle to rescue his girlfriend Honey Bunny (and later, Lola Bunny). Along the way he must avoid other Looney Tunes characters, such as Sylvester, Tweety, Foghorn Leghorn, Wile E. Coyote, Daffy Duck, Elmer Fudd, Taz, Yosemite Sam, and many others....

All five games in the series were reviewed by The Angry Video Game Nerd in Episode 75 of his series.

Tropes associated with the series include: