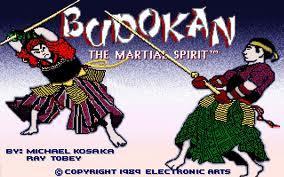 Master others, you show force. Master yourself, you show strength.
Advertisement:

Budokan: The Martial Spirit is a 1989 video game by Electronic Arts and released for MS-DOS and the Amiga gaming platform, with ports for the Sega Genesis, Commodore 64, ZX Spectrum, and Amstrad CPC in 1991.

You play as an unnamed martial arts apprentice at the Tobiko-Ryu dojo, where you get to train in four styles of combat (unarmed karate, nunchaku, bo-staff, and kendo sword). You can practice on your own, or spar in a one-on-one match against the computer AI or another human opponent. Once you're confident in your fighting ability, you can participate in a tournament held at the Nippon Budokan arena, where you get pitted against a variety of opponents who use both the weapon styles you've trained in and some unique weapons of their own.

While early versions of the game didn't really provide a backstory as such, later versions would reveal that the protagonist was a criminal who was taken in by the Tobiko-Ryu sensei as a way of repaying a debt to the protagonist's father.