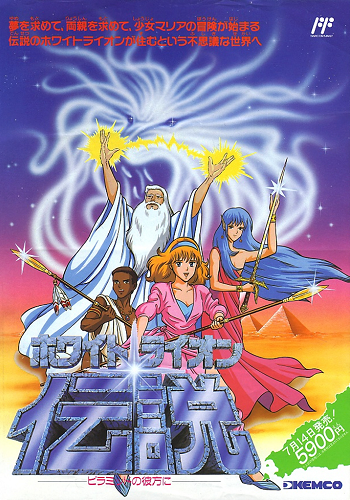 A big plate of Covers Always Lie with a side dish of Foreshadowing and Wardrobe Malfunction.
Legend of the Ghost Lion (title screen) or Ghost Lion (packaging) is a turn-based JRPG by Kemco originally released for the Nintendo Entertainment System in 1989 in Japan and brought to the USA in 1992. It is an adaptation of the 1988 Japan-only film Beyond the Pyramids: Legend of the White Lion. A very, very loose adaptation. Legend of the Ghost Lion is a Dragon Quest clone and in being such matches the foundation of a (nowadays) generic fantasy setting with a frugal layer of elements from Beyond the Pyramids: Legend of the White Lion.
Advertisement:

The story starts with the disappearance of Maria's parents on their search for the White Lion. Distraught, Maria goes in search for them. The village elders are supportive and give her the spear of a young hero who once defeated the White Lion and whose spirit now resides in the spear. They also advise her to start by finding a lamp that houses a spirit too. Maria finds it, but when she tries to cross a bridge, it breaks down, causing the girl to fall in the water and lose consciousness. She awakens shortly after being saved by fairies, who tell her she is no longer in the World of Humans but has entered the World of Dreams. This being the world of the White Lion, she can continue her journey without delay in search for it and her parents.

The game is generally rated as average, with its two standout points being its female protagonist and its take on summoning. Its non-specialness is one of three reasons it sold poorly. Another is that, as far as the American market goes, it lost on name value due to the film never leaving Japan. And the third reason is the Super Nintendo Entertainment System, which came out in Japan in 1990 (a year after the game) and in the USA in 1991 (a year before the game) with strong lineups. A late stage NES title like Legend of the Ghost Lion was easily lost in the console era shift.

Legend of the Ghost Lion provides examples of: