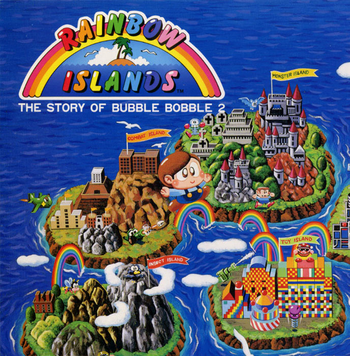 Rainbow Islands: The Story of Bubble Bobble 2 is a vertically-oriented platform game by Taito, originally released as an Arcade Game in 1987.
Advertisement:

Following on from the end of Bubble Bobble, Bubby and Bobby have regained their human forms and now have to fight their way through the Rainbow Islands, seven differently themed islands each with different enemies and a huge boss at the end. Complicating this mission is the fact the islands are flooding, and each level must be completed before the water reaches the top, since the water kills instantly when touched.

The main difference between Rainbow Islands and its predecessor is the increased size of the levels, which are many screens high. It also introduces a new weapon for defeating bad guys; rainbows, which are fired in front of the player and have an arc shape, so that they can trap enemies, be stood or bounced on, and, most importantly, collapsed, which is the best way to destroy enemies.

The game has been praised for being surprisingly complex, largely due to its enormous array of potential collectibles and the various ways of obtaining them.

It has had a few iterations:

If Bub gets bubbled and transformed by the True Final Boss on his last life, the alternate Game Over screen shows that he gets imprisoned with eleven other people who were transformed.

If Bub gets bubbled and transformed by the True Final Boss on his last life, the alternate Game Over screen shows that he gets imprisoned with eleven other people who were transformed.