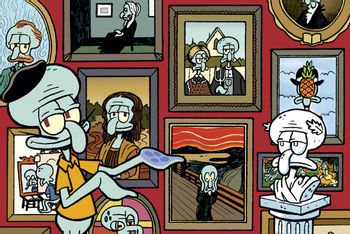 Squidward may not know art... but he knows what he likes.
"You would never guess who lives here."
— Frank Sinatra upon seeing Rudy Vallee's memorabilia room(s)
Advertisement:

There are people who are vain, and then there's people who are vain. The latter have such a depth of narcissism that they don't just keep a mirror handy, but fill their house floor to ceiling with mirrors (But how else can I catch all my expressions?), portraits of themselves, self portraits (expect a few nudes), statuary, awards (if any, no matter how minor) and sundry other them-centric paraphernalia. Any pictures will likely be exclusively of themselves, or with celebrities, royalty, and politicians. It's almost unheard of for a shrine to include family pictures, although a Family Portrait of Characterization might consist of shrines of all the family members, casting the entire family as narcissistic.

Basically, they make their home a Shrine To Self. This varies in intensity and size, some might reserve a single (and perhaps even tastefully simple) room as a "Trophy Room", while others may make hallways, wings, or even museums to themselves. Villains don't just put it in their home, but like to plaster their equipment, vehicles and Mooks in Malevolent Mugshots.

A variant is the "shrine to a former glory", made by someone who realizes they're no longer famous and doesn't like their new situation. The White-Dwarf Starlet will often fill her mansion this way. For extra tragedy, the mansion/museum will be in an advanced state of decay.

Characters encountering the shrine (or more likely, being led to it by the owner) will usually be stunned speechless, a fact their host will take to be awe rather than disbelief at their tackiness (though the onlooker might feel both to varying degrees). This serves not just as a way to characterize someone as self centered, but also as potentially having been (or still being) important, and may in fact endear them to audience/character if they play their narcissism in an affable rather than grating manner.

In the United States military and political realm an office wall with awards and pictures of the individual with famous or higher-ranking persons is known as an "I Love Me" wall. The etiquette is generally that your "I Love Me" Wall should be in a reasonably private location (like your house), not shoved into the face of all passers-by (unless you're on the Internet). In the extras on the Top Gun DVD, one of the military advisors opines that Viper's "I Love Me" wall in his house is unrealistic, because he has a wife and kids, which (in his opinion) tends to rapidly reduce the "I Love Me" Wall to an "I Love Me" corner, and finally to an "I Love Me" shoebox in the attic...

Compare Stalker Shrine, House of Broken Mirrors and Kitsch Collection. Often a Sub-Trope of Room Full of Crazy. Egopolis is basically a city or country-sized Shrine To Self.

The superhero/villain version of this is Superhero Trophy Shelf.