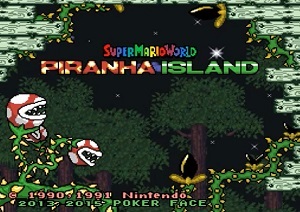 Super Mario World: Piranha Island is a Game Mod of Super Mario World by PokerFace. The plot is simple: Mario gets stranded on the titular island and has to find a way off. Unfortunately, the Pirahna Wizard who rules the island and his legion of Piranha Plants are hungry and want to eat Mario.