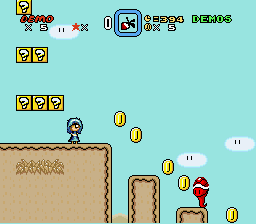 "Hey there raocow, this is everyone!"
Advertisement:

A Super Mario Thing is an aptly named ROM Hack of Super Mario World by Talkhaus, the community surrounding Let's Player raocow. Originally made as a "tribute" to his hack-related efforts, it's a game that follows his, at times, Surrealistic commentary to a T, even more so if one doesn't know about the plethora of insider jokes with which the community could not help but fill the game. It was started and originally managed by Kristian, and later taken up in the management department by YoshiCookieZeus.

The game stars Demo Roseclairnote and, if you choose Player 2, her slightly purpler Palette Swap, Iris, an armless cycloptic demon alien minion, which pretty much summarizes the nature of the game. During an attempt to purchase vegetables for her anonymous master, something goes wrong and she is sent to what appears to be the Mushroom Kingdom of the future- a Bad Future where Mario is nowhere to be seen and the world is ruled by the tyrannical King Charles IV, ruler of the Charlies (Chargin' Chucks). After falling right into (or as it were, onto) a deep-seated political conflict about food and meeting up with the Yoshi resistance, Demo sets out to murder the king, who resides deep within a volcano beyond a great veil of Nintendo Hard platforming, item puzzles, silly Touhou Project shout outs and other assorted obstacles.

You can find the game as an .ips patch on ROM Hack archive SMWCentral

A sequel, A Second Mario Thing (A2MT), was stuck in Development Hell for a while before being officially discontinued on January 25th, 2014, but that didn't stop raocow from playing it anyway. However, in August 28, 2016, it was announced that the game was finally complete

, so it was Saved from Development Hell.

Finally, in March 2013, Talkhaus released a prequel on the Super Mario Bros. X engine: A Super Mario Bros. X Thing: Prelude to the Stupid, which throws in even more raocow-fan-bonuses, up to and including raocow himself being a playable character. The plot finds Demo and her sister Iris in the Castle of Absolutely No Significance, where they plan to stock up on vegetables. Meanwhile, Koodnote the Ensemble Dark Horse star of another Super Mario World hack, Drama Mistery is infiltrating the same castle for unknown reasons, Sheathnote the protagonist of raocow's webcomic, Artificial Time XS sort of falls into their reality, and a certain wacky Let's Player finds himself surrounded by his own creations...

The sequel to that game, A2MBXTnote Or, because of the sheer scale of work involved in its production compared to the last installment, A2MBXT Episode 1: Analog Funk, was released in August 2014. Demo and Iris, having completed their excursion through the Castle of Absolutely No Significance, return to their mothership to find that someone had broken in and stolen all the Super Leeks powering it. Not long after the cycloptic sisters are sent back to investigate, Kood teleports to them in time to warn them about someone creating a generator of dimensional portals using the stolen leeks—threatening to rip apart the multiverse in the process. It is now up to the three of them (and Sheath and raocow) to journey across the dimensions to recover the Super Leeks and "save the everything" at all costs. But there is something more sinister afoot than before...

. Demo also originally starred in a duo of Platform Hell ROM hacks, What the Hell? and What the Hell? 2, by raocow himself. One of A2XT's plot writers has stated they take place before the rest of the series, and they occasionally receive callbacks and references in the ASMT series proper, but they are mostly unconnected otherwise. Both cyclops sisters are playable in Superb Demo Sisters, a mostly unrelated Super Mario Bros.-type SMBX game also made by the Talkhaus.

Tropes that apply to A Super Mario Thing: