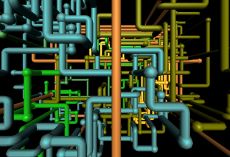 A plumber's nightmare.
Water pipes, ducts and similar things have a tendency to be arranged in ways that resemble great walls of metallic spaghetti.
Advertisement:

This is especially common in Video Games that use thick pipes for a Space-Filling Path, Insurmountable Waist-Height Fence, or just generic platforms in an Absurdly Spacious Sewer or Eternal Engine.

Can sometimes be Truth in Television due to people taking the easy path out and just using whatever scrap parts they happened to have lying around.