Literature / The Books of Ember 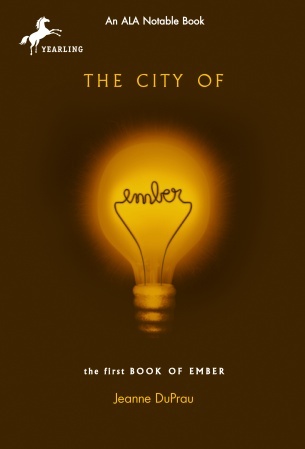 "In Ember, the sky was always dark."
— Opening lines of the first book.
Advertisement:

The Books of Ember is a four-book post-apocalyptic children's series that follows two children as they learn more about their city, the titular City of Ember, its past, and their world.

The first book, The City of Ember, introduces us to Lina Mayfleet and Doon Harrow, who live in Ember. The city is surrounded by darkness in all directions and so relies on a hydroelectric generator to keep the town alight and running. However, the generator is beginning to fail, causing blackouts that are increasing in both frequency and length. At the same time, the food left in the city is beginning to grow scarce, without any way to replenish its stores. It won't be long until the entire city fails and becomes cloaked in eternal darkness. In the midst of this chaos, Lina discovers an old note that appears to tell of a way out of Ember. Unfortunately, it was badly damaged by Lina's little sister Poppy chewing on it, making the note difficult to decipher. Meanwhile, Lina and Doon have to confront a conspiracy that wishes to keep the truth under wraps...

The book was released in 2003 and became surprisingly popular. A sequel titled The People of Sparks was released the following year and picks up right where Ember leaves off. A prequel to the series called The Prophet of Yonwood was released in 2006 and focuses on a different set of characters. 2008 saw the release of a film adaptation of the first book, starring Saoirse Ronan and Bill Murray, as well as the last book in the series, The Diamond of Darkhold, which takes place after Sparks.

Not to be confused with the Emberverse series.

Books in the Series