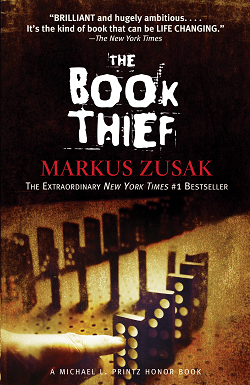 "It's just a small story really, about, among other things:
* A girl
* Some words
* An accordionist
* Some fanatical Germans
* A Jewish fist fighter
* And quite a lot of thievery"
— Death, from the prologue
Advertisement:

Liesel Meminger watched Death take her brother. She was on a train to her new home in Molching, her mother unable to support them any longer. She's brought to 33 Himmel Street where her foster parents, Hans Hubermann and his wife, Rosa, live. Hans is a kind and gentle man while Rosa a hot-headed woman who expresses her love through a foul mouth.

They aren't the only people Liesel will eventually form bonds with: there's Rudy Steiner, an energetic troublemaker with a habit for stealing; Max Vandenburg, a Jewish fist fighter; and Ilsa Hermann, the mayor's melancholic wife who lets Liesel use her library. Ilsa even lets Liesel steal from her home after the young girl catches Rudy's habit of thievery. However, instead of nabbing food for an ever empty belly, Liesel steals to feed a different kind of hunger: words.

A war torn Germany will teach Liesel the power of words; that they can be tools of destruction and cruelty as much as creation and kindness. As Liesel learns and grows, Death will be a passive observer to Liesel's life and that of the humans he is obligated to take to the afterlife.

The Book Thief is a 2005 historical fiction novel by Markus Zusak. The novel is split into ten sections, each one named after a book that is important to Liesel in some way. Sections are further split into chapters of varying lengths.

A film adaptation was released theatrically on November 8, 2013. It was directed by Brian Percival and the script written by Michael Petroni.