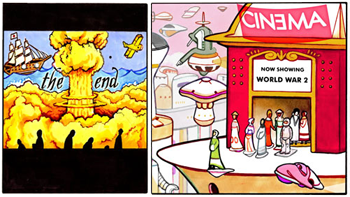 "Were there eight kings of the name of Henry in England, or were there eighty? Never mind; someday it will be recorded that there was only one, and the attributes of all of them will be combined into his compressed and consensus story."
— R. A. Lafferty, And Read the Flesh Between the Lines
Advertisement:

People in the future tend to misunderstand past culture in funny ways. The further one goes into the future, the more distorted history seems to become. Apparently, history is the one field of study that gets worse rather than better in the distant future.

It's understandable if the fall of civilization has destroyed all the data, or an oppressive regime is deliberately suppressing the inconvenient truths about them. But sometimes, the records decay and the facts get lost, even when no malice is intended at all.

This is commonly seen in a Distant Sequel to another work, especially if takes place several lifetimes or more after its prequel. If the first story's characters and events haven't been forgotten about entirely, the people of the current setting will often remember them in ways that the audience, who will have it them fresher in mind, will realize are wildly inaccurate and often quite Entertainingly Wrong.

This is a little strange when it appears in societies that use Time Travel, since they could always just go back and check. This also reacts in odd ways with very Long-Lived or immortal characters, since they can continue to serve as original witnesses of the past for very long periods of time. This can coexist with such characters, however, since one or a few people likely won't be able to control an entire culture's shifting views — and that is, of course, assuming that they're unbiased and accurate sources themselves, or that they even want the true past to be known. This is occasionally inverted by a Fan of the Past, unless their conclusions are Entertainingly Wrong.

Compare From Cataclysm to Myth and Lost Common Knowledge. Often occurs in concert with Days of Future Past. See also Earth That Was and All Hail the Great God Mickey! When done well, it tends to be a form of Entertainingly Wrong. When present-day writers get the past wrong, it's Anachronism Stew or Popular History for more recent history; similarly, when past writers predicted the then-future/now-past badly, that's Zeerust. Related to Famed In-Story and Shrouded in Myth.

Not to be confused with the TNG episode, or the Hulk storyline.