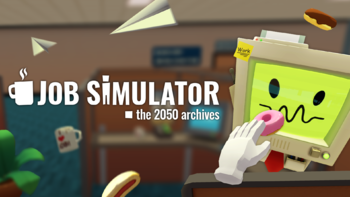 In the future, robots have taken over most of the jobs. A museum has an exhibit where people can enter simulations and find out what jobs were like back when humans were in the workforce.

Job Simulator is a tongue-in-cheek game where you have a choice between four jobs: auto mechanic, office worker, convenience store clerk, and gourmet chef. There are both day-shift and night-shift options.

A sequel called Vacation Simulator was released in April 2019.