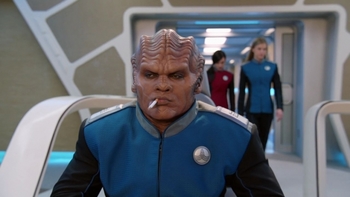 Bortus engaging in the second most unhealthy fixation in this episode.
When a time capsule from 2015 is discovered, Gordon gets attached to a woman who put her phone in the capsule. Meanwhile, Klyden and Bortus bond over a new habit: smoking.