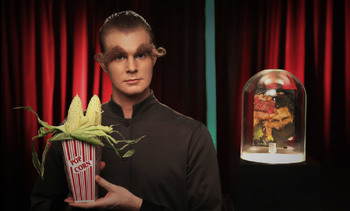 "Greetings and welcome to Earthling Cinema. He is your host, Garryx Wurmuloid."

Earthling Cinema is a web series made by the group known as Wisecrack. It stars Mark Schroeder as the host Garryx Wurmuloid, an alien archeologist that "discovers" movies from the 20th and 21st century, provides hilariously inaccurate summary of the film and then proceeds to give a brief, in-depth look on the message of the film.

, it has since been moved to its own channel "Alien's Guide