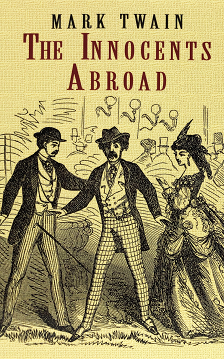 "One must travel, to learn."
Advertisement:

The Innocents Abroad, or The New Pilgrims' Progress is an 1869 book by Mark Twain. It is about his 1867 travels through Europe and the Holy Land aboard the Quaker City. In it, Twain describes the sights and sounds of their destinations, as well as his American traveling companions, and records his observations on the cultures, traditions, and histories of the countries.

The book was revolutionary in that unlike other travelogues, Twain observed it from an American standpoint, and used a familiar, informal tone, instead of the other breathlessly awed and respectful books of the time.