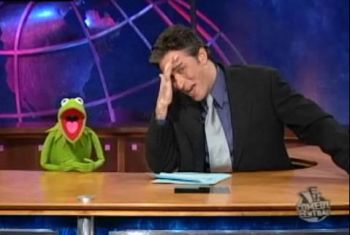 It doesn't take that much imagination,
In any given Real Life situation,
To integrate a Muppet for the realisation,
Life could be much, much more of a sensation!
— Spray, "Everything's Better With Muppets"

This is not about works that explicitly feature The Muppets, such as Sesame Street, The Muppet Show, The Muppet Movie, Fraggle Rock or most other Jim Henson productions. This is about featuring Muppets in other works as Special Guest Stars (which is an interesting role reversal from The Muppet Show, in which singers and actors/actresses would regularly guest-star). This automatically makes the work better.

Note that when this happens, the Muppets are (almost) always treated as people (even when there are references to Muppetry-related things), an almost Kayfabesque convention that also extends to press junkets and interviews. Also note that this frequently happens in live-action TV shows that otherwise use only normal life forms.