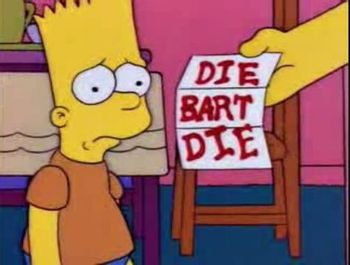 Homer: "OH, MY GOD! SOMEONE'S TRYING TO KILL ME! Oh, wait. It's for Bart."
Advertisement:

Bart is plagued with threatening letters written in blood (except for one written in black by Homer that reads, "I'LL KILL YOU SCUM") and by the recently-paroled Sideshow Bob. To keep Bart from getting killed, The Simpsons go into witness protection and move away to Terror Lake.

This was the last episode written by the original writing team (Sam Simon, David Stern, Jeff Martin, Jon Vittinote (Though he would later return for Seasons 13-16, and also did some work on The Simpsons Movie), Jay Kogen, and Wallace Wolodarsky) before David Mirkin's new hires were brought aboard, so they wanted to go all out and leave a good last impression. To many fans, they succeeded.

Itchy tricks Scratchy into going into his cat hospital and promptly straps the cat to an operating table.

Example of:
Strapped to an Operating Table

Itchy tricks Scratchy into going into his cat hospital and promptly straps the cat to an operating table.