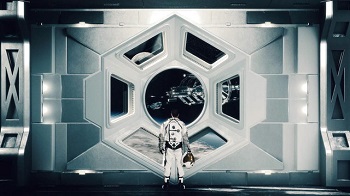 Humanity's place among the stars begins with one hex.
"Our world has changed. And despite our advances in both science and technology, we can no longer deny what is clear: our time on Earth is ending. So we turn our gaze upwards to the stars, and embark on the greatest journey in human history — a journey into the unknown, to discover a new world. A new home. A new beginning for mankind."
— "A New Beginning" Announcement Trailer
Advertisement:

Sometime in the near future, Earth is ravaged by a social and ecological cataclysm known as the Great Mistake, which knocks humanity back into a new Dark Age. The disaster forces different nations to unite into new geopolitical entities to undo the damage. Humanity manages to pull through and stabilize the world again, but with Earth running low on resources and habitable land, governments and corporations begin searching for a new world to colonize. You play as the leader of one of these colony expeditions, backed by one of 8 factions:

As you land on the planet and combat the alien wildlife and other colony expeditions, your colony can take one of three technological affinities:

With Beyond Earth: Rising Tide there is also a distinct emphasis on hybrid affinities as well. Not simply cross-classing, the new hybridized affinities come with their own unique units and own unique aesthetic for the upgrades of the base units.

Also diverging from the previous Civilization games, Victories are delivered via a quest system; each colony expedition gets four victory quests at the beginning of the game and is told step-by-step what is needed to accomplish them. Three are tailored to one of the affinities and the fourth is one that anybody can do. They are:

On May 18, 2015, Firaxis announced an expansion pack for Beyond Earth entitled Rising Tide. As the name suggests, it introduced additional naval and oceanic options to the game, including oceanic settlements and new units. Released on October 9th, 2015, new colony factions were added, hybrid affinities implemented, different planetary types have more than cosmetic effects, and the diplomacy system was completely overhauled.

"Now we look upon our new world for the first time. On these alien shores our destiny awaits."