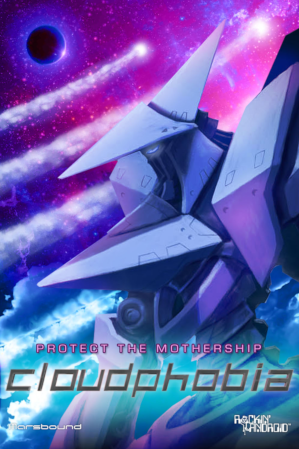 cloudphobia is a doujin horizontal shoot 'em up game developed by Marsbound, and was released during Winter Comiket C77 on December 30, 2009 for Windows PC. The game takes place in a war-torn future on Mars during an ongoing battle against The Empire and those looking for independence from it. As the Empire was testing their latest prototype fighter, the "EAM-10P Englar", a sudden attack was unleashed from its pilot "EG-04 Mist", a telepathic girl who was raised in a military research facility, has lost control of herself and unwittingly stages an all-out attack against the rebellion. The rebellion narrowly survived an attack from its powerful beam weapon, however, in order stop the enemy from preparing for another attack, they make one last-ditch effort against the Empire before its too late.

In cloudphobia, players take control of the "EAF-06 Loftárása" and can choose between one of two weapons — the PLG-90 laser ignition rifle or the Núllpunktur vibroblade — while armed with a handful of missile salvos as they shoot or slice their way through the game's five stages against an armada of fighters, mechs, and battleships. Unlike most shoot 'em ups, the player's mech isn't a One-Hit-Point Wonder as they have a Life Meter instead, however, players are under a strict time limit and must quickly beat each stage as possible, so they must utilize the boosters of the Loftárása to quickly advance through the stages in time. There's a catch: in order to keep players from simply ignoring enemies altogether and rush to the end, any enemy that leaves the screen will attack their mothership supporting them, and if it is destroyed, the game will also be over, so players must manage when they'll use the Loftárása's boosters and minimize between damage between them and their mothership.

The game was localized by Rockin' Android in 2013 through Amazon and was later re-released to Steam in 2016, featuring improved controller support, HD resolutions with optional smoothing filter, online leaderboards, and Steam Achievements.

the ship is sunk
game over