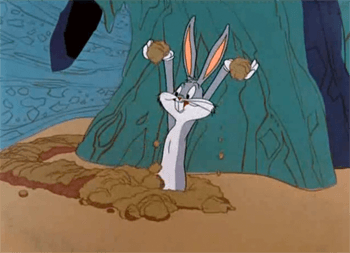 "Well, here we are! Pismo Beach and all the clams we can eat!" he said as he emerged in the middle of a cave.
"Usul, we have wormsign the likes of which even God has never seen!"
— Stilgar, Dune (1984)
Advertisement:

The Monster is coming for you, but you can't see it. What you do see is the floorboards splitting as it pushes through the ground underneath them towards the camera, or just dust being kicked up if it's outside.

It's not always played for scares though; sometimes it's just a convenient visual shorthand for indicating where something moving underground — such as Mole Men, or a Drill Tank — happens to be. It can be used as a legitimate tension-building device to hint a monster the audience hasn't seen yet (or hasn't seen much of) or as a way for lower-budget films to get the monster in without actually spending money on the generally more expensive effects shot.

Sometimes the effect will be the ground bulging up as if something has been forced through it, while other times it will be subsidence, as if the monster has actually consumed the earth, undermining the ground above it. note If any level of physics at all is implied, the first suggests that the stable ground was dense enough to need to be pushed out of the way, while the second suggests that it was compressed or liquefied into a material phase that couldn't support its own weight after the burrower passed.

See also Sand Worm, Nothing Is Scarier, Traveling-Pipe Bulge. Compare Bad Vibrations. The Croc Is Ticking is the audible equivalent.

Nothing whatsoever to do with Movie Sign (although that is named after Dune's worm sign), Wormtongue or Wormtail.

The only way to see a Nestler coming is by their wormsign trail, so pay attention and stay alert!

The only way to see a Nestler coming is by their wormsign trail, so pay attention and stay alert!