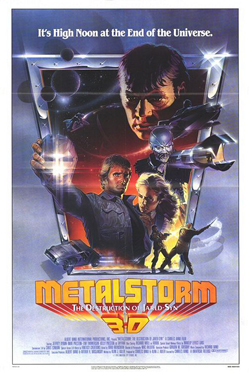 Metalstorm: The Destruction of Jared-Syn is a 1983 science fiction movie filmed in 3D, directed by Charles Band, produced by Charles and Albert Band and Alan J. Adler, and written by Adler.
Advertisement:

On the planet Lemuria, intergalactic criminal Jared-Syn (Michael Preston) has become the leader of a tribe of humanoids called Nomads, who are determined to drive humans from their ancestral lands. The human ranger Dogen (Jeffrey Byron) follows him to Lemuria in order to defeat him. He teams up with Dhyana (Kelly Preston), the daughter of a miner murdered by Jared-Syn's cyborg son Baal (R. David Smith), but Dhyana is soon kidnapped and taken to Jared-Syn's lair. Dogen searches for Jared-Syn's lair with the help of washed-up soldier Rhodes (Tim Thomerson).