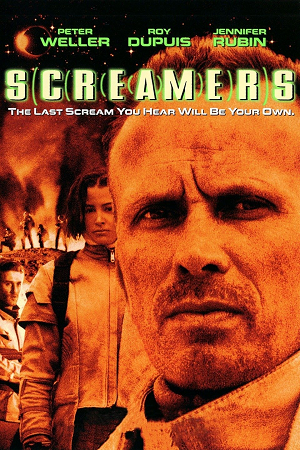 Screamers is a 1995 Sci-Fi Horror film based off of the Philip K. Dick story "Second Variety".

The film is set on the planet Sirius 6B in the year 2078. Sirius 6B was the source of Berynium, a mineral that solved the energy crisis on Earth, but which produced radioactive waste as a byproduct, contaminating the planet and leading to a war between the New Economic Block, and their former employees The Alliance. While on Earth there was a tense peace between the NEB and Alliance, on Sirius 6B, the war went nuclear. Eventually, the Alliance introduced "screamers", a series of subterranean killing machines, which replicate themselves ad infinitum in an automated factory. The war eventually ruined the planet, leaving only a handful of Alliance and NEB strongholds intact. As it turns out, Earth had long since abandoned Sirius 6B, with the soldiers fighting for control of a ruined planet.

As Colonel Hendricksson (Peter Weller), the Alliance's leader on Sirius 6B, heads out to discuss a peace treaty with the NEB General, it is revealed that the screamers have changed; building newer models. They can pass for human, and soon, no one is safe.

A direct-to-video sequel, Screamers: The Hunting, was released in 2009.

Not to be confused with the obnoxious Jump Scare Shock Sites you see floating around the internet as Schmuck Bait.