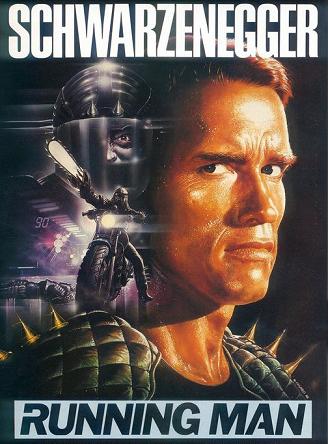 He's playing for a prize. The prize is his life.
Richards: Killian — I'll be back.
Killian: Only in a rerun.
Advertisement:

The Running Man is a 1987 Dystopian sci-fi action film directed by Paul Michael Glaser. It is a loose adaptation of the novel of the same name by Richard Bachman (aka Stephen King). It stars Arnold Schwarzenegger, Maria Conchita Alonso, Richard Dawson, Yaphet Kotto, NFL Hall of Famer Jim Brown, Dweezil Zappa, Jesse Ventura, and Rodger Bumpass in a cameo role as Phil Hilton.

In dystopian 2010s America, police officer Ben Richards (Schwarzenegger) refuses to fire at innocent civilians and is arrested and sent to a labor camp. He escapes, but is captured again, and ends up as a contestant in the nation's number one television show: The Running Man, a Deadly Game hosted by the gleefully sadistic Damon Killian. In the show, Ben and his fellow "contestants" must fight their way through the Stalkers, killers set to stop their advance, to win their freedom.

Not to be confused with the 1963 British crime drama directed by Carol Reed, the similarly-titled but vastly different (apart from the dystopian setting) 1976 film Logan's Run, or the South Korean variety show—although another popular Korean series has now come out with a similar Deadly Game premise.

to be directed by Edgar Wright.

The Running Man provides examples of:

The Running Man has been brought to you by: Breakaway Paramilitary Uniforms, Ortopure Procreation Pill, and Cadre Cola; it hits the spot! Promotional considerations paid for by: Kelton Flame Throwers, Wainwright Electrical Launchers, and Hammond & Gage Chainsaws. Damon Killian's wardrobe by Chez Antoinne: 19th-Century craftsmanship for the 21st-Century man. Cadre Trooper and studio-guard sidearms provided by Colchester: the pistol of patriots. Remember: Tickets for the ICS studio tour are always available for Class-A citizens in good standing. If you'd like to be a contestant on The Running Man, send a self-addressed stamped envelope to: ICS Talent Hunt, care of your local affiliate, and then go out and do something really despicable! I'm Phil Hilton! Good night, and take care!