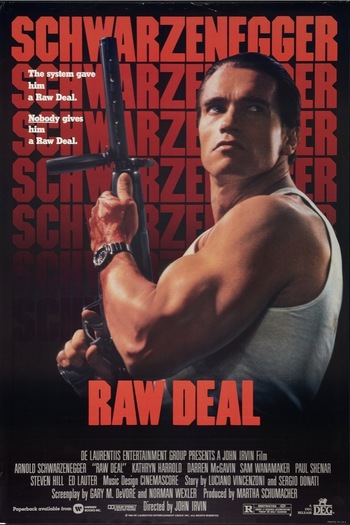 Whoa, okay, we get it; Schwarzenegger is in this movie!
"The system gave him a Raw Deal. Nobody gives him a Raw Deal."
— Tagline
"This must be what they mean by... poetic justice."
— Mark Kaminsky
Advertisement:

Mark Kaminsky (Schwarzenegger) is working a dead-end job as a small-town sheriff after being forced to resign from the FBI. He and his wife Amy would give anything to get out and return to the big city. An opportunity presents itself when FBI Chief Harry Shannon (Darren McGavin) calls Mark in on a secret assignment of revenge. Henchmen of a Chicago mob boss named Luigi Patrovita (Sam Wanamaker) have murdered Shannon's son, an FBI agent protecting an informant with information on Patrovita. Knowing that someone in law enforcement is selling information to Patrovita, Shannon wants Mark to infiltrate and destroy the Patrovita organisation from within; in return Shannon will get Mark reinstated in the FBI.

Mark accepts the offer and takes on the identity of an out-of-town criminal, quickly getting Patrovita's attention by causing trouble for his enemy, Jewish mob boss Martin Lamanski. Unfortunately this also earns Mark the enmity of Patrovita enforcer Max Keller (Robert Davi), who starts to dig into the background of his new rival...

Not to be confused with the 1948 Film Noir directed by Anthony Mann and starring Dennis O'Keefe.