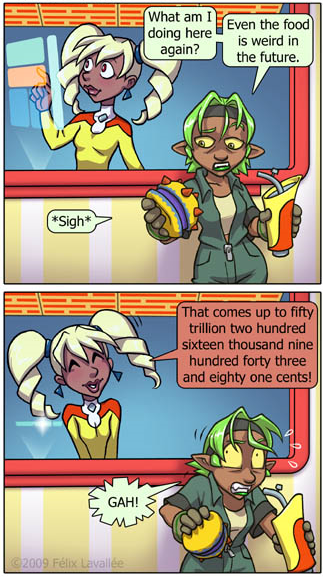 Can you break a quadrillion?
Young Space Cadet: Can I borrow a million, billion space credits until next Wednesday?
IQ High: Sure, just take it out of my wallet.
— Duck Dodgers
Advertisement:

As everyone knows and grandparents are fond of reminding us, the value of money tends to decrease over time, and the purchasing power of the dollar has decreased by 95%. It would be logical to assume that it will continue to do so, right? Well, Hollywood has caught on to this and, if The Future is depicted, goods will likely be (by the standards of The Present Day) highly overpriced. At this rate, a Zillion-Dollar Bill will just get you a cup of coffee and a newspaper.

In real life, it is a possible but not very likely scenario, especially in a fiat currency system.note As opposed to an commodity exchange currency system, in which the currency is assigned a fixed value in tangible assets. The best-known and formerly most common example of this was the gold standard, in which currency could be traded for a fixed amount of gold. Fiat currency on the other hand has value because you must use it to pay taxes. Therefore a fiat currency's value is dependent on how credible the issuing government is perceived as being, while a commodity currency is dependent on the commodity it can be exchanged for actually being valued by the public. First, in modern economic science, inflation isn't even seen as something inherently bad. As long as the average income also multiplies, the inflation would do little harm. Deflationary periods are usually tied with recessions rather than booms. Deflations were only beneficial in commodity currency systems free of debt, such as the gold standard or Lincoln greenbacks. However, if the creation of money is based on loans, such as the fractional reserve system that the Federal Reserve operates under and bank credits that we have now, then this is very likely. Printing money en masse as credits and bailouts with interest can create rapid inflation, and rapid deflation can cause a sharp decrease in the money supply to pay back that debt with interest, causing defaults, unemployment, and stockholders selling off worthless investments. This was theorized to be one of the causes of The Great Depression.

Second, governments can sometimes simply revalue their currency when the numbers get too unwieldy, by creating "new" dollars or whatever, worth 1,000 or whatever of the old dollars. Except that governments usually leave that to the central banks. This revaluing is usually only for hyperinflation — they don't do much about "normal" inflation. For example, they aren't going to change things so that that newspaper in the 1980s that cost 40 cents and now costs $1.50 costs 40 cents again — ditto that 20-cent bag of candy that now costs about $2. Likely, though, when numbers become ridiculously high for a chocolate bar, new currencies will arise and we'll gradually shift to their use for sake of convenience, with the older currencies likely kept in record (so that they're still valuable).

The portrayal of runaway cumulative inflation in fiction probably peaked from 1973 through 1982. The annual inflation rate in the U.S. never fell below 6% and often reached double-digit percentages. To this day, there's been no consensus as to what caused this period of "stagflation." The "Nixon Shock" of 1971, when President Richard Nixon took the US dollar off the remaining vestiges of the gold standard allowing the Federal Reserve to have no restrictions in printing and loaning money as debt, was a highly likely cause. For all we knew at the time, this high inflation rate might continue indefinitely. Thus, many fiction writers painted a picture of the future with $15 cups of coffee by the year 2000. (Insert joke about Starbucks' prices here.)

Of course, this trope is also possible to a degree with commodity currencies as well. The values of gold and silver dropped significantly when Spain opened mines in the Americas; something similar could happen with asteroid mining or Matter Replicators.

As a rule of thumb, if a rate of inflation is expected to remain constant at X% annually, then prices will double roughly every 72/X years (So long as 72/X >= 2). So if inflation is 3 percent prices double every 24 years and add a zero every 78 years, while if the average rate is 7 percent prices double every 10 years. When a show pulls out this trope, use this to compare what future prices are actually likely to be at that time.

Al says "for the stamp" sarcastically, but if he's actually being honest and the cost of a stamp in Sam and Al's "present" time period (the late 1990s) is in the ballpark of $100; that would be a rate of inflation of 40,000% in less than a decade! For the record, as of 2016, the cost of a single 1st class postage stamp has yet to go over fifty cents.

Reason #7 why time travel is no good: You can't buy anything.

Reason #7 why time travel is no good: You can't buy anything.