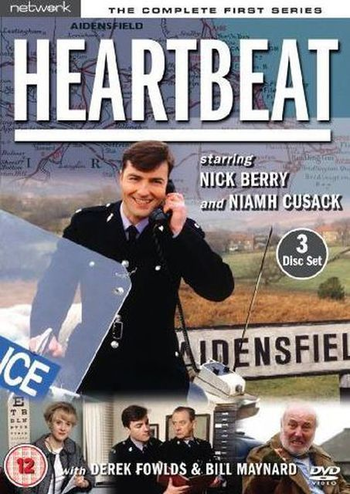 Heartbeat was a long running British drama series which aired from 1992 to 2010. Set in rural Yorkshire in The '60s, it was about the adventures of the local constabulary and medical services of the village of Aidensfield and the larger town of Ashfordly where the main police station of the area is situated. Later on, real places (particularly Whitby) would appear, placing the fictional Aidensfield in much the same location as the real Goathland, where much of the location filming took place.

The series originally began with Constable Nick Rowan and his doctor wife accepting a reassignment from London, which was troubled with considerable civil unrest at the time. As Rowan and comrades keep the peace, they keep a wary eye for the local con man, Claude Greengrass, who is forever looking for the next big score, which is usually just this side of legal to keep them from arresting him.

The series feels much like a police version of All Creatures Great And Small (Johnny Byrne was effectively the showrunner for both series) as small town life proves incredibly lively with numerous crimes to solve and medical problems to treat, usually with a touch of humour.Not to be confused with the short-lived 2015 television series of the same name.