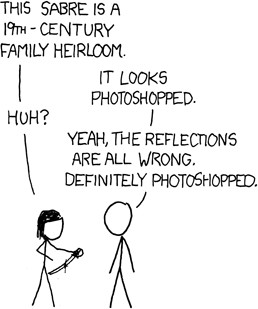 "As we've mentioned a few times before, the real world occasionally gives rise to murderers so terrifyingly crazy that if we saw them in a horror film, we would instantly write them off as utterly ridiculous B-movie cheese."
— Cracked, "6 Real Serial Killers More Terrifying Than Any Horror Movie"

When exposed to an exaggeration or fabrication about certain real-life occurrences or facts, some people will perceive the fictional account as being more true than any factual account.

This might lead to people acting on preconceptions about unfamiliar matters even in a life-or-death situation, or cause viewers to cry foul when things on a show work out in a way that actually is realistic but contrary to "what everybody knows", like complaining of the "fake Scottish accent" of a real Scottish actor or about a character's death from a bullet "merely" to the shoulder.

This is known as an "Orange Box" in television and movies, named after the "black box" of airplanes which are actually orange to make them easier to spot.

Very widespread in fiction. In Real Life, it is commonly expressed as "you can't make this shit up".

Tropes commonly falling into this
Related:

Contrast with Uncanny Valley, where a certain amount of increased realism causes the remaining unrealistic aspects to become extremely obvious and disconcerting.

See also: Based on a Great Big Lie and Artistic License.