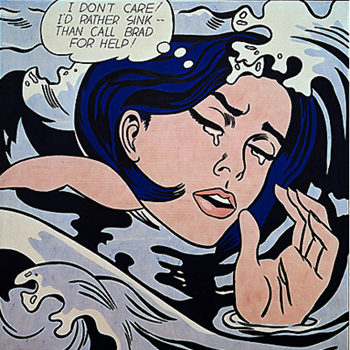 "Drowning is almost always a deceptively quiet event. The waving, splashing, and yelling that dramatic conditioning (television) prepares us to look for is rarely seen in real life."
— Mario Vittone,

In media, death by drowning is a horrible, protracted ordeal. The victim flails against the uncaring water and screams for help again and again. At times they slip below the surface but strength born of panic and desperation will bring them back up for air. Finally, all hope gone and their exhausted frame failing, they go down for the last time. They may even have a moment to say their Last Words or shed a Single Tear.

In reality, a drowning victim paddles quietly for a few moments and sinks. They are too busy struggling for air to yell or scream, nor can they control their arms enough to wave or signal for help. Instincts are running the show, and they're ineffectually flapping their arms against the water to push their mouth above the surface. An untrained onlooker may not even notice that anything's wrong. Professionals keep a watch for telltale signs like a swimmer bobbing low in the water who is unable to speak or respond when spoken to.

The splashing-and-screaming reaction — "aquatic distress" — does happen, and is also not to be ignored, but it's rare, often occurs when fighting against strong currents, and almost never happens in a place like a pool. Kids in particular are noisy swimmers, and it's more worrying if they're quiet. This is especially true for very young children who still have a diving reflex: a small child who falls into water will simply hold their breath and sink. Toddlers have drowned in public pools with crowds of people around them.

If this is Played for Laughs, it likely takes the form of Stop Drowning and Stand Up. This quickly alleviates the victim's (imagined) helplessness in the face of (nonexistent) danger. Of course this also may be subverted, as in reality it is possible to drown in ankle-deep water.

This article should be limited to aversions and egregious examples: tropers cannot be asked to tell if King Graham's drowning animation

is realistic enough, unless the process is depicted in detail and gotten wrong.