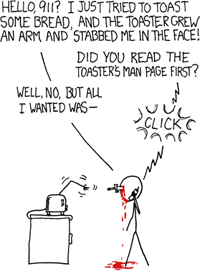 "I think I know from where your problems stem.
Would you, could you, RTFM?"
— The Internet Oracle
Advertisement:

Simply, it's a "Tale From Customer Service": When assisting people with technological items, only about 1 out of 5 read the instructions for the item they've purchased. Fewer still read more than a page or two. Note that the trope title is a more polite version of the

It's one that you've Seen A Million Times, especially in Sit Coms: "I'm great with tools; I don't need to read the instructions." Or the manual is in an entirely different language, or it was written in English by someone who can barely say "I doesn't knows speaking English".

Be very careful when using this response in Real Life. Even if you mean it as an innocent suggestion, it carries an implied insult. There are plenty of people asking questions not because they're lazy, but because they don't have the manual. If they bought the product used or were given it as a hand-me-down, the manual was probably lost ages ago. Some products have even shipped without a manual, or with different manuals for different releases, some of which are incomplete.

Making matters worse, many items these days, particularly digital-only ones, are shipped without the manual expecting you to download from the company's site. A good manufacturer will post the manual for download on its website, with any updates and errata already applied, but not all manufacturers are good; moreover, depending on the age of the item, the manufacturer may not even exist anymore. Making the manual require a download also implies that the user has an internet connection, and depending on their living situation they may not even have internet access.

But even if the manual is available, that doesn't mean it's good, useful or even accurate, contrary to what many people seem to believe. For example, even though IKEA furniture is meant to be easy to assemble, you have to admit: because the pages are black-and-white 2D images, sometimes it's difficult to determine exactly what you're looking at and which slot you're supposed to insert the tab in. It's no coincidence that the company also provides video walkthroughs.

In video games, and sometimes other software, the manual may be of no help. For most games, the manual only tells you how to play the game, not how to beat it. (For that, see Guide Dang It!.) It won't tell you how to solve any puzzles unless it's some form of Copy Protection. Even worse, the manual might have been written for a pre-release version of the game, with details such as the control scheme differing subtly from the released version.

Sometimes the product is from a foreign market, in which case chances are the manual (along with the in-product text) might not be in languages the user understands (a common case being Westerners who import Japanese video games due to localizations taking a while, not existing, or being garbage), so Read The Freaking Manual would also mean (spend months, possibly years to) Learn The Freaking Language.

And finally, for the manufacturers themselves: Requiring people to read a manual is not only a possible indication of bad, unintuitive design, you're also decreasing your potential customer base and thus profits.

This can also lead to Misblamed, where people forget to read the credits of a work, or don't even look at the staff.

Compare All There in the Manual, when details to understand the plot of a work or even the whole plot are told in the manual or in other material. Compare also the Directionless Driver, who actively refuses to read a map, ask someone where a given road is (including the one they're on), or accept any kind of assistance whatsoever when it comes to getting where they're going.