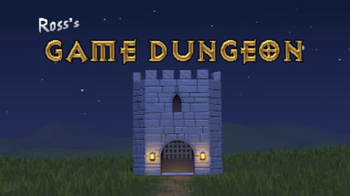 The dirtiest cells have all been reserved for EA executives.
"I think the best way to look at this show is: you know how some street people in cities start screaming and preaching at everyone about the end of the world or UFOs or something? They don't even care if anyone is listening or not? Well, if you think of me like that, then you shouldn't be disappointed with this show."
— Ross Scott in the first episode
Advertisement:

Ross's Game Dungeon is a review show created by Ross Scott, who most know as the creator of Freeman's Mind and Civil Protection. The series mainly covers and analyzes obscure games and occasionally more recent games as well, with the humor taking a more deadpan approach in comparison to other review shows.

A playlist of all episodes in order can be found here

, while new episodes are announced on his website Accursed Farms.

Jazz in the Haunted Forest

Jazz in the Haunted Forest