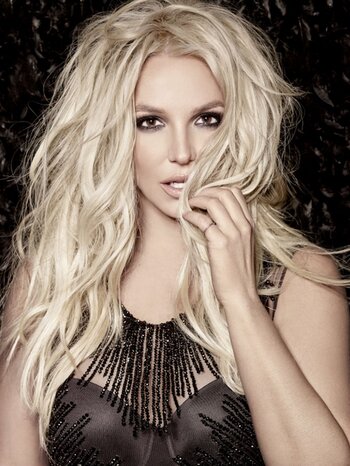 She's not that innocent.
Influences:
Influenced:
"I don't like defining myself, I just am."
Advertisement:

Britney Jean Spears (born December 2, 1981) is a pop star who rose to fame in 1998 off of the success of her debut single "...Baby One More Time". She also had many immensely successful singles and iconic moments in her career. Known for her catchy, dramatic, electronic-focused, deep and edgy pop music. She also has a Cash Cow Franchise set up because of her.

You may know her from her hit songs such as "...Baby One More Time", "Oops!...I Did It Again", "I'm a Slave 4 U", "Me Against the Music", "Toxic", "Gimme More", "Womanizer", "3", "Hold It Against Me", "Till the World Ends", "Scream & Shout" and "Work Bitch". Britney has also inspired many female singers of the 00's with the likes of Lady Gaga, Marina Diamandis, Carly Rae Jepsen, Sky Ferreira, Ellie Goulding, Kesha, Lana Del Rey, Miley Cyrus, Charli XCX, Katy Perry, Billie Eilish and Pixie Lott all citing her as a big influence in their music and career choices.

A former member of the 90s revival of The Mickey Mouse Club, Britney was the first, and ultimately the poster girl, for the late '90s wave of boy bands and female solo artists. Part of her rise came from the exploitation of her sexuality, as the seventeen year old Britney flaunted her lolita looks with school girl outfits and tight red leather catsuits, while still having an image of innocence. Interestingly, Spears orchestrated many of her most controversial moments, including choosing a high school setting for her first music video, and unbuttoning her t-shirt for her '99 Rolling Stone cover. She did two promo tours in 1998, in a mall and one with *NSYNC. She did four tours in four years, starting with "...Baby One More Time" tour and ending in Dream Within a Dream.

Her albums and singles sales total in the millions, and her music videos gained constant rotation on MTV; she made numerous, well-received guest spots on Saturday Night Live as both host and musical guest while most of her MTV VMA performances are considered some of the most controversial and memorable, most specifically her strip-tease performance of "Oops!...I Did It Again", dancing with a snake for "I'm A Slave 4 U", and lip-locking with Madonna, among other things. She had a hit movie (Crossroads) and received 2 Grammy nominations (for Best New Artist in 1999 and Best Pop Vocal Performance in 2002) and won a Grammy Award for "Toxic" in 2005, along with a multitude of sold out world tours under her belt. In early 1999, Spears started dating Justin Timberlake after being reunited with him on tour. The two broke up in March 2002, after three years together, much to the delight of the tabloids. Britney soon received a star on the Hollywood Walk of Fame in 2003.

At the height of her fame in the early 2000s, "Britney" was more-or-less synonymous with "Idol Singer", to the point that the entertainment press regularly used "The Next Britney" as shorthand for "The next big thing". In an interesting footnote in pop music history, Britney's popularity inspired a small wave of female singer-songwriters who were marketed by record labels as "The Anti-Britney", since they knew that Spears' popularity had to peak sometime. While Spears was known for her blonde supermodel looks, her peppy and colorful stage persona, and her sexually charged lyrics and choreography, the Anti-Britneys tended to be dark-haired women who played their own instruments, and generally favored a more minimalistic sound with introspective lyrics. There were a lot of them, but Vanessa Carlton, Michelle Branch and Avril Lavigne are probably the best-known.

In 2004, Britney's personal life entered a downward spiral, with the media reporting every detail. Britney had an impulse marriage to a childhood friend in Las Vegas which was quickly annulled after just 55 hours. This was followed by a whirlwind romance to backup dancer Kevin Federline. The pair married months after meeting while Federline's ex-girlfriend (Moesha star Shar Jackson) was still pregnant with his second child. The public and media widely believed Spears was too good for Federline and that he made her "trashy". A reality TV series in 2005 (Britney & Kevin: Chaotic) was created in an effort to combat the waves of bad publicity surrounding their relationship. Viewership started off strong but gradually declined over the show's run and ironically, only adding to the media craze around her.

Though she ultimately divorced Federline in 2006, shortly after the birth of her second child, it culminated in a rather public mental breakdown that resulted in Britney night-partying heavily with Paris Hilton & Lindsay Lohan, shaving her head, and checking into rehab twice. She was sent back and completed a month in rehab, but continued to spiral out of control. She gave a universally panned performance of her single "Gimme More" at the 2007 MTV Video Music Awards that was followed by her losing custody of her kids for a period of time and eventually leading to a three hour standoff at her home regarding the custody of her sons. The standoff involved police, ambulances, helicopters, and the paparazzi. She was soon placed in a 5150 hold at the hospital and after being released, her father was named her conservator by the courts. The conservatorship was put to an end on November 12, 2021.

All of this is explained further, though not entirely in-depth, in her 2008 MTV documentary For The Record. Britney also discusses life in the spotlight, the thrill of performing and explains her actions after her marriage to Federline fell apart. She also revealed she Will Not Be a Victim, how dancing is therapy for her, and shows her workload over a three month album launch. A later documentary, 2021's Framing Britney Spears, prompted renewed attention to her ongoing conservatorship, and subsequent reporting by New Yorker journalist Ronan Farrow and court statements by Spears herself alleged financial and other mistreatment.

In the interim, though, Britney secured her status as a pop culture figure and icon. To date, she has sold over 100 million records worldwide and her albums, Circus and Femme Fatale, debuted at #1 on their first weeks of release. She also had one of the five biggest-selling concert tours of 2009 and 2011 with "The Circus Starring Britney Spears" and the "Femme Fatale Tour", respectively. In May 2012, it was announced that she, alongside Demi Lovato, would be joining the judging panel of the US version of The X Factor. She left the series at the end of her one-year only contract to focus more on creating music and performing.

During this time, she collaborated with Will.I.Am, who released their duet "Scream & Shout" that October. The song was a global success, reaching #1 in over 20 countries. She spent most of 2012 and 2013 recording her 8th album Britney Jean, with William Orbit, Sia, will.i.am, and David Guetta. Spears co-wrote all the album's tracks and cited the album as her most personal yet, though it became her lowest debuting album on the US charts - at #4 - partly because of low promotion against her more hyped Vegas residency, "Piece of Me". She also did a rockumentary called "I Am Britney Jean" that showcased the build up to her said residency. Spears' two year Vegas residency started December 2013, opening to rave reviews and selling out the first two legs. Due to its success, it was extended until December 2017.

Guest Appearances and Roles in Television

Bottom line: If you love yourself, it will all work out

"Hit Me Baby One More Time"

The third season of "You" uses a slow, atmospheric cover of the poppy "Hit Me Baby One More Time" to underscore the murderers' rapidly deteriorating marriage and their mutual distate for suburbia.

"Hit Me Baby One More Time"

The third season of "You" uses a slow, atmospheric cover of the poppy "Hit Me Baby One More Time" to underscore the murderers' rapidly deteriorating marriage and their mutual distate for suburbia.