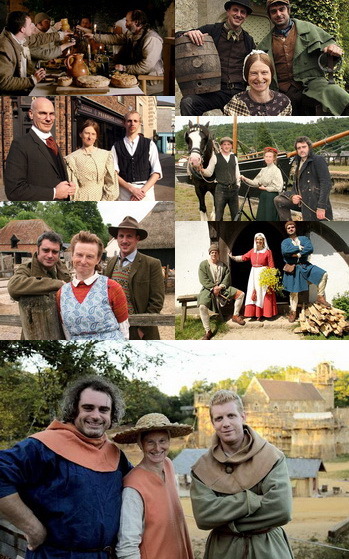 The team and their continuing adventures throughout history...
Advertisement:

A loose series/collection of historical docudramas about everyday life, farming and industry in the English countryside throughout the ages, produced since 2005 by The BBC, in association with Lion Television.

The series currently consists of eight one-season TV shows, each mapping one specific historical period in British history. The shows were created by Lion Television and broadcast on BBC Two and occasionally BBC HD. The first seven shows were produced by David Upshal

taking over the producer role for the eighth programme.

The shows have a steady main cast in the form of a trio of professional English historians, ethnographers and archaeologists: Ruth Goodman

. In two of the series, Langlands' role was handled by Tom Pinfold instead. In each show, these experts act as both presenters and protagonists. The various episodes also feature guest appearances by various other people knowledgeable about historical crafts, old technologies, period culture, and so on.

Shows in this series so far:

, which, while only loosely linked to this series, followed a similar format and was aired in 2006, between Tales from the Green Valley and Victorian Farm.

Tropes seen in the shows of this series: