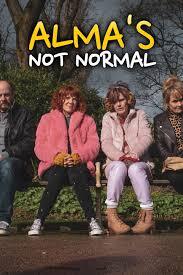 Alma's Not Normal is a Brit Com (created by Sophie Willan) about a woman called Alma and her dysfunctional family. The pilot initially aired in 2020, before the rest of the Series was made available on the BBC iPlayer.

The show is about Alma, a woman with no qualifications, who decides to become an escort to achieve her dreams of leaving Bolton. Meanwhile, her mother battles an addiction to Heroin and her grandmother must cope with her daughter deciding to live with her.

Tropes featured in this show: