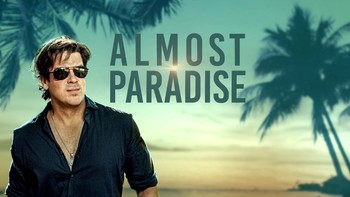 Almost Paradise is a 2020 Detective Drama show executive produced by Dean Devlin and Gary Rosen (who previously worked on The Librarians together) and staring another Librarians alum, Christian Kane, as lead Alex Walker (who also worked with Devlin on Leverage) alongside a bunch of Philippine-based actors/actresses due to the show being co-produced by ABS-CBN and Electric Entertainment. It's schedule to air 10 episodes on WGN America and it's available via Amazon Prime. While the language used is English, there are subtitles for non-English languages, including Tagalog.

Alex Walker (Kane), a former DEA agent who was forced into early retirement. Once the DEA’s most resourceful undercover operative, the combination of his partner’s betrayal in a joint operation with the Spanish National Police in Barcelona and a life-threatening battle with hypertension has made him decide to leave the agency and live in Cebu as an expat, where he's employed by Paradise,note The actual shooting location is the Shangri-La Hotel Mactan a resort hotel located in Mactan. While Alex is content to start all over (and while just leaving his only daughter Evelyn to attend her university studies in America), he ruins a Mactan Police-led undercover op. From there, Alex does lend a hand to his new friends in the MPD by using his law enforcement experience while trying to ensure that he pays the bills in Paradise (mostly for rent and other utilities that he may encounter in the hotel) and attends to the needs of the hotel's guests.

On June 4, 2020, Devlin announced that all of the show's episodes will be on a streaming platform to gauge potential fan reception for a Season 2 as he was told by WGN America that they cannot back him for Season 2 due to their change in their channel's television format. However, IMDBTv announced that they are willing to back the production of Season 2 depending on how many people are able to watch it online via their website.

In February 2022, it was renewed for Season 2, which will be streamed via Freevee.