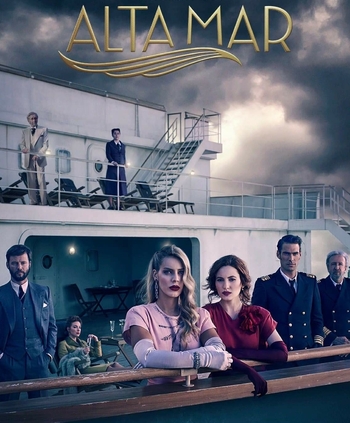 Alta Mar (High Seas) is a Netflix original series. The first two seasons premiered in 2019, with the third and final one releasing in August 2020.

World War II has recently ended. Two sisters, Carolina (Alejandra Onieva) and Eva Villanueva (Ivana Baquero), board a luxurious cruise ship, the Barbara de Braganza, which is sailing from Spain to Brazil. On the way, Carolina is going to marry the ship's owner, Fernando Fábregas (Eloy Azorin), and Eva, an aspiring writer, is meeting an interested editor in Brazil.

Just as they are on their way to the port, an unkempt woman rushes in their car's way and pleads for help: she is being forced into marriage against her will, and she will be murdered if her fiancé discovers she has run away. After some consideration, Carolina and Eva decide to help her and smuggle her on board. However, barely does the Barbara de Braganza set sail, Eva really witnesses the woman being thrown overboard, and the sisters are drawn into a multi-sided intrigue which, it turns out, has everything to do with them.

Two years later, the Villanueva sisters board the Barbara de Braganza for a voyage from Buenos Aires to Mexico. However, as one character ruefully notes, things tend to happen when the sisters travel on this ship and this voyage is no different. The sisters are drawn into another web of intrigue involving espionage, corporate sabotage, and a deadly virus that could wipe out millions.