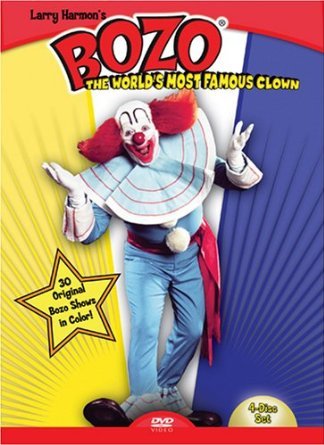 Live from Chicago, ''The Bozo Show'' is on the air! (Pictured: Boston's Bozo)
The Bozo Show (later known as The Bozo Super Sunday Show) was an hour-long live kids show that aired on WGN-TV 9 in Chicago and its superstation feed , WGN America (back when it actually carried WGN programming) from 1960 until 2001. Originally known as Bozo's Circus until the 1980s, it stars Bozo, the world's favorite clown (whose existence predates the shownote Among other things, he had been the mascot for family albums (including music and book and record sets) released on Capitol Records, where he was known as "Bozo the Capitol Clown" beginning in the 1940s.). Bozo was portrayed by Bob Bell from the show's inception until his retirement in 1984, after which Joey D'Auria succceeded him for the remaining seasons. Assisting Bozo were Cooky the Cook, Ringmaster Ned (played by Ned Locke), Professor Andy, Wizzo the Wizard, and many others. The show always promised tons of fun, and generations of Chicagoans grew up with Bozo (once WGN went national, so did many others). In 1994, the show moved to Sundays (as to accommodate the new WGN Morning News) and the show was retitled as The Bozo Super Sunday Show. 1997 saw a further Retool to comply with the newly-instituted E/I laws. The show was officially cancelled in 2001; Bozo does pop up from time to time, including some segments on the aforementioned Morning News.
Advertisement:

Memorialized along with fellow contemporary WGN children's series The Ray Rayner Show and Garfield Goose & Friends in the 2005 two hour TV special Bozo, Gar, and Ray: WGN TV Classics, which looks at the history and impact of all three series (though primarily Bozo), along with numerous surviving clips and bloopers from the three series. This is aired twice a year annually during the holiday season. WGN has since aired a complete Bob Bell-era episode of Bozo's Circus and a 1960s compilation special, both found within the station's archives.

Like Romper Room, Bozo's Circus/The Bozo Show is a franchised show, meaning individual stations could do their own version of the show, but Chicago's was by far the longest running and best recognized, especially by the 1980s when WGN was carried as a superstation by cable providers across the country.

The (*) indicates segments that were forced onto the show after the E/I laws were passed.

The Bozo Show contains examples of: